You are here:  Home » English » Torture in the name of treatment

Torture in the name of treatment

Posted by International Bridges to Justice  at October 18th, 2012 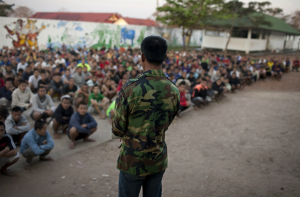 Hundreds of thousands of people identified as drug users in China and across Southeast Asia are held without due process in centers where they may be subjected to torture, and physical and sexual violence in the name of “treatment”, Human Rights Watch said in a briefing paper released in July.

The 23-page document, Torture in the Name of Treatment: Human Rights Abuses in Vietnam, China, Cambodia, and Lao PDR, summarizes research with individuals who had been detained in Vietnam, China, Cambodia, and Lao PDR. More than 350,000 people identified as drug users are detained in the name of “treatment” in these countries for periods of up to five years. In many centers, drug users are held alongside homeless people, people with psychosocial disabilities, and street children, and are forced to perform military drills, chant slogans, and work as “therapy.”

International health and drug-control agencies, including the UN Office on Drugs and Crime, the Joint UN Programme on HIV/AIDS (UNAIDS), and the World Health Organization, recommend comprehensive, community-based harm reduction services, including evidence-based drug-dependence treatment and access to sterile syringes as essential to protect the health and human rights of people who use drugs. Drug detention centers that hold drug users for long periods of time without providing evidence-based treatment violate these standards and are widely believed to be ineffective. Research in China and Vietnam has found high rates of relapse among individuals held in drug detention centers, as well as increased risk of HIV infection from being detained. 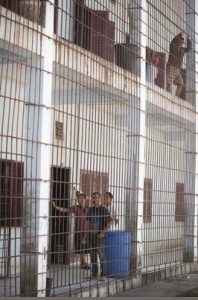 Depending on the country, so-called treatment consists of a regime of military drills, forced labor, psychological and moral re-education, and shackling, caning, and beating. Human Rights Watch documented forced labor in detention centers in China, Vietnam, and Cambodia, though the nature and extent of forced labor varied within and between countries.

In Vietnam, “labor therapy” is stipulated as part of drug treatment by law, and drug detention centers are little more than forced labor camps where tens of thousands of detainees work six days a week processing cashews, sewing garments, or manufacturing other items. Refusing to work, or violating center rules, results in punishment that in some cases is torture. Quynh Luu, a former detainee who was caught trying to escape from one center, described his punishment: “First they beat my legs so that I couldn’t run off again… [Then] they shocked me with an electric baton [and] kept me in the punishment room for a month.”

Access to drug dependency treatment within the centers was either restricted to a small subset of the center’s population, who were also required to adhere to a rigid and punishing forced labor regimen, or nonexistent. Huong Son, who was detained for four years in a drug detention center in Vietnam, said, “No treatment for the disease of addiction was available there. Once a month or so we marched around for a couple of hours chanting slogans.”

Human Rights Watch also found evidence that children were detained in drug detention centers in Cambodia, Vietnam, and Lao PDR, and subjected to the same “treatments,” including forced labor, military exercises, and physical and sexual abuse.

“Drug detention centers jeopardize the health and human rights of detainees,” said Joe Amon, director of the Health and Human Rights Division at Human Rights Watch. “They are ineffective, abusive, and are detaining people in violation of international law.” Mandatory HIV testing was common in China’s drug treatment centers, but test results were not always disclosed to patients. A former detainee in Guangxi Province, China, said, “I was tested in detox twice for HIV but was never told the result. Then when I got out I was so sick that I went to the clinic. I was scared of getting arrested, but I have a son and I didn’t want to die. They tested me and told me I have AIDS.” Unprotected sex and unsafe drug use occur in the treatment centers, but condoms and safe injecting equipment are not available.