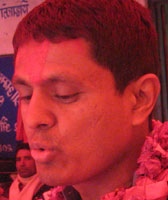 When hundreds of people from Lamjung disappeared during the Nepali armed conflict in 2001, family members, desperate for answers, retaliated violently against the newly installed Maoist government. However, Ram Kumar Bhandari, whose father was among the dissappeared, feels that it is more constructive to seek answers through peaceful means.

At the time of his father’s disappearance in December of 2001, Ram was still a university student in Kathmandu. His father, a school teacher, had encouraged his son to be involved in social activism, and this encouragement became one of driving forces that compelled him to work within his community to bring about positive change. After receiving a BA in developmental studies and an MA in sociology, Ram worked in different sectors in various parts of the country. He eventually returned to his local village in western Nepal where he saw that the psychological trauma his family suffered was prevalent throughout his village, as other villagers had never heard from or about their loved ones since their disappearances.

The situation in his village led Ram to found the Committee for Social Justice (CSJ), an activist organization that assists villagers in seeking information about individuals who have gone missing and helps families cope with their losses. CSJ has mobilized families to hold the government accountable for missing loved ones, and, perhaps most importantly, has led the formation of a community support group.

Seeing the value in public dialogue and education, Ram became involved with community radio, which he finds to be conducive with his mission to promote a culture of peace and social justice through understanding. At the same time, Ram recognizes that it is essential for local community organizers to be the voice for thoughtful discussions to bring meaningful change.

To this day, Ram’s and other families have yet to hear whether their loved ones are alive or dead. Yet Ram continues to be a voice for his community, and the memories and words of his fathers help him through the most challenging moments.

In Nepal, a general lack of awareness regarding the criminal justice system, by citizens and political officials alike, inhibits the government’s ability to maintain law and order.  Disappearances of loved ones has created a general mistrust of enforcement officials. Corruption is rife within the judicial system and the courts can be elitist, inefficient, and poorly controlled.  As a result, men, women, and children accused of crimes  are often mistreated and arbitrarily detained.

Ram is using his $5,000  JusticeMakers Fellowship to identify the root causes of criminal justice challenges within the social context of the Nepali community. It will also identify and address the drivers of criminal activities in local communities. Through radio broadcasting, workshops, and publications, Ram hopes to provide legal rights education – minimizing confusion and mistrust surrounding the justice system. Ram will also work to monitor the district court and detention centers so that legal aid can be provided to the accused. Training sessions will also be held for government and police officers to further curb instances of abuse and corruption.