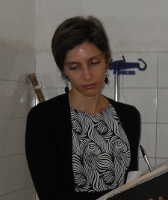 Maria de la Paz has dedicated many years of law study and has received many degrees in the field. She received law degree from the Catholic University in Asuncion. She later pursued Masters in law and a few years later achieved another Masters degree in “The New Challenges to the Rule of Law.”

Maria de la Paz has been involved in the realization of projects of the Interdisciplinary Center of Social Law and Economic Politics of the Universidad Catolica. She has also worked on a report titled “Elaboration of the Document of Design for the Application of Alternatives to Preventative Prison for Adolescents and Youth in Conflict with the Penal Law.” She did this as a member of the Institute of Comparative Studies in Social and Penal Sciences as part of the Project to Love.

Maria de la Paz is currently the Professor responsible of Political law I and II of the faculty of judicial and diplomatic studies of the Universidad Catolica. She is also in the midst of writing her doctoral thesis on the “Current problems of Penal Law” for the Universidad de Salamanca in Spain.

There are many structural deficiencies within the Public Defense Office. The Ministry of Public Defense, which depends on the Supreme Court, has no budgetary autonomy and self-sufficiency, and is assigned a very low budget for the needs it confronts. Although the Public Defense is also part of the judiciary, it does not have sufficient forensic, social or psychological assistance at its disposal. When people need these services, they should go to doctors, psychologists and social workers of the judiciary, which are scarce for the amount of work they have. Public Defenders do not even have vehicles at their disposal. In Asunción, Public Defenders work in shifts of nine days, approximately every 36 days. They are called by prosecutors and judges when a defendant claims to have no means to afford a private lawyer. After being apprehended by the police and required to provide proof of insufficient income to afford a private lawyer, detainees are provided with free legal assistance by Public Defenders. They often deal with people claiming to have been tortured, injured and subjected to physical abuse by the officers involved in the arrest. Given this situation, Public Defenders require written record of evidence and request a medical examination upon call for inspection and treatment of the victim. For the reasons given above, such assistance often does not arrive or simply arrives too late.

The strategy is to create a specific protocol for cooperation and work between six Criminal Public Defenders and the Medical Schools in the region The goal is to recruit  at least three medical interns who are in the legal medicine and psychiatry program at the National University of Asuncion or the equivalent. She wants to implement this program in order to that instrumentalize violations of defendants’ physical integrity and to introduce alternative measures to imprisonment from which defendants can currently not obtain due to the lack of medical-legal options. Moreover, public defenders do not have medical opinions to support the development of medical conditions that a victim may experience after being abused. Many times, these circumstances lead to the denial of procedural outputs that would benefit the defendants, that could result in their freedom or the settlement of their case.

She plans on  organizing inter-institutional  cooperation, presentating the cooperation protoco and tracking and monitoring of the implementation of protocol assessment meetings of cooperation which will allow recognition of State officials at different levels of performance. She also wants to increase professional medical sensitivity about prisoners and present these experiences. Finally, she will publish the protocol and final presentation of the results to the authorities in order to achieve a institutionalized design to the sustainability of alliance and experience gained.