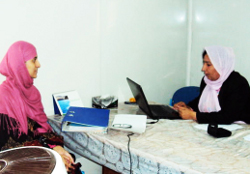 Mahfuza Folad has been the Executive Director of Justice for All Organization since the organization’s founding in 2008 and has been tirelessly working with imprisoned women to assist them with their cases. Ms. Folad’s career spans several different organizations including the Afghanistan Human Rights Organization, Global Rights Kabul, and AWJA Kabul. Through these experiences, Ms. Folad has represented individuals in criminal and family cases, divorce, alimony, dowry, and custody cases. Through her time working as a defence lawyer, Ms. Folad has had time to truly understand the issues facing Afghan women.

Afghanistan ranks 181 out of 182 nations on the U.N. Human Development Index. For an Afghan national, obtaining legal representation for him/herself or for a family member accused of a crime – frequently without cause or proof – is a luxury they cannot afford, an idea they do not understand, a privilege for beyond their reach. After a complete collapse of the legal system during the rule of the Taliban, it is slowly recovering but there is a strong need to rebuild the legal infrastructure – including training judges and defence lawyers, expanding legal aid, and focusing on the application of the rule of law. Due to the fledgling nature of Afghanistan’s legal system, there remain many individuals in the margins, including the accused, the indigent, women, and children, all who lack access to justice.

There is a strong need for legal aid, as most of the accused have attempted to navigate the complex court system on their own, only to find that the country’s criminal courts don’t have the staff or capacity to provide them with legal aid. In addition, many judges continue to make rulings based on Afghanistan’s customary law, rather than the criminal or civil legal codes. Such customary law includes provisions that are particularly oppressive towards women and therefore imprisonment of women on such charges reflect patriarchal cultural attitudes in which women are seen as the property of men, especially fathers or husbands. While such cases are common throughout Afghanistan, there is a complete lack of representation for the accused, who often lack knowledge about their legal rights. The accused are frequently abandoned by their families due to shame – even when no crime has yet been proven. Lastly, although the concept of criminal defence is established in western nations, the culture of having a defence lawyer is still uncommon in Afghanistan and even though the access to a lawyer for the accused is mandated by the Afghanistan constitution, the reality is that this constitutional right has not been enforced.

The deteriorated state of the Afghan legal system has left many individuals – including many women and children – without access to legal counsel and support even though the Afghan constitution guarantees the criminally accused legal representation. Women are often imprisoned wrongly on false charges, many of them stemming from customary law which tend to oppress women and criminalize behavior that is not illegal under either Afghan penal law or Sharia law. In addition to lack of representation for the accused, many female prisoners also lack any knowledge about their rights and responsibilities under the criminal justice system. Furthermore, female prisoners are often stigmatized culturally and lack the resources to speak up for their rights or approach the justice system or legal professionals for assistance. Lacking education and resources, these women are often systematically denied their rights and suffer in prison as a result.

Ms. Folad will use her JusticeMakers grant to provide direct legal representation to accused women to fill the critical gap in the rule of law and access to justice in Afghanistan. Through this she hopes to expand access to justice for indigent and accused women. She also hopes to expand the knowledge of female prisoners with regards to their rights and responsibilities under the Afghan criminal justice system by providing 12 days of criminal justice trainings for accused women and creating and publishing 1000 “Know your Rights” brochures which will be distributed to the accused, their family and friends, and other actors in the Afghan criminal justice system. Through these efforts, she hopes to expand access to lawyers for women who are accused of crimes, to institutionalize a culture of criminal defence that is currently absent in most of Afghanistan, and to ensure that the accused and other individuals in Kabul know their rights in case they are accused of a crime.