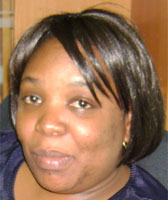 Joy has said that being both a Christian and a lawyer doesn’t necessarily mix. She has, however, rejected the money and power that one could acquire as a high powered attorney and sees herself instead as a lawyer who can make a difference in people’s lives. Her religious beliefs inspire her to change the course of history in positive ways: her vision is to make a contribution to the Kenyan national legal aid project and her organization, CLEAR, is helping implement it. Despite the limited resources she and CLEAR have to work with, she has faith that every individual she helps or touches is a step towards a better legal system in general.

She wants to see that people in custody get a state-appointed lawyer and that these defenders do their work well. She also wants to see a fair legal system in the Kenyan courts that gives people faith and belief in a system that has been broken for so long. She points to the phrase “Why pay a lawyer when you can pay a judge” as something that needs to be purged from the Kenyan legal system’s reputation.

The criminal justice system in Kenya is rife with poverty and corruption.  The country lacks a legal aid system, even for children, and the most effective method of ensuring a court date is through bribery. Prisons are under resourced and overcrowded, leading to inhuman living conditions and abuse. Because of the backlog, even petty offenders regularly wait 3 to 5 years and even longer.

Joy is working to decrease the average time on remand awaiting trial and to afford justice to those most in need of representation in these over-crowded Kenyan prisons. Providing legal education to prison populations of four prisons around Kisumu, Kenya will enable prisoners to represent themselves at mentions and bail hearings and to access support from and referrals to pro bono lawyers.