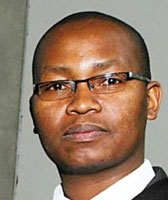 Buhle Dube has seen how the criminal justice system in Swaziland can fail the indigent accused. Throughout the course of his career with Swaziland’s Ministry of Justice and High Court and various NGOs in Swaziland, Ghana and South Africa, Buhle has lamented the absence of criminal defenders, the horrid prison conditions, and the inefficient mechanisms for processing criminal cases.  Despite the discouraging obstacles he faces in his line of work, Buhle has a selfless commitment to improving Swaziland’s justice system. In 2003, Buhle and two other colleagues created a labor consultancy firm that offered legal advice to workers in the textile industry.  Six years later, Buhle’s commitment to his people drives him to continually push for social rights reforms in Swaziland.

Between 2004 and 2007, Buhle worked with Yonge Nawe Environmental Action Group where he investigated human rights violations by park rangers and uncovering allegations of murder and assault.  During this period, he saw rampant abuse of suspects, often while they were in police custody. Those who were harassed and accused were often men and women who were ignorant of their rights. He also saw that reforms were needed in the media, as newspapers and television programs focused on the most sensational aspects of cases, often resulting in a public conviction even before the case could be heard.

As a law researcher at the Constitutional Court of South Africa to Justice T.H. Madala, Buhle’s passion for constitutional litigation and human rights was cemented. He returned to Swaziland to take a position as a lecturer at the University of Swaziland teaching international, Roman and administrative law. Buhle also became a partner at his law firm and currently serves on the board for the Centre for Human Rights and Development. He has recently volunteered his legal services to an NGO in Swaziland called One Circle that focuses on empowering women and children.

Swaziland operates under a dual legal system, in which only the most serious cases are tried by Magistrate courts.  Those men and women left to be tried before Customary courts are legally mandated to face the judge without the benefit of legal representation or the presentation of evidence in their favor.  When the court system was launched, it was the decision of the prosecutor to determine the judicial venue.  Since that time, however, such decisions have been left to the arresting officer.  The resulting leverage gained by these officers has led to an environment ripe with torture, wrongful convictions, and corporal punishment – as officers seek to extract bribes, carry out personal vendettas, and control the mechanics of justice.

Buhle is using his $5,000 JusticeMakers Fellowship to reverse years of injustices that have permeated the day-to-day activities of the courts. Buhle’s project focuses on transferring cases that involve police brutality and corruption from the Customary courts to the Magistrate courts.  He also aims to amend the Constitution of Swaziland to prohibit ordered canings as part of a sentence.  As part of this project, he is identifying cases with the potential to be moved to Magistrate courts, while challenging the charges on behalf of caned convicts. He will also work with the media to raise awareness of human rights violations and report without fear of government retaliation.