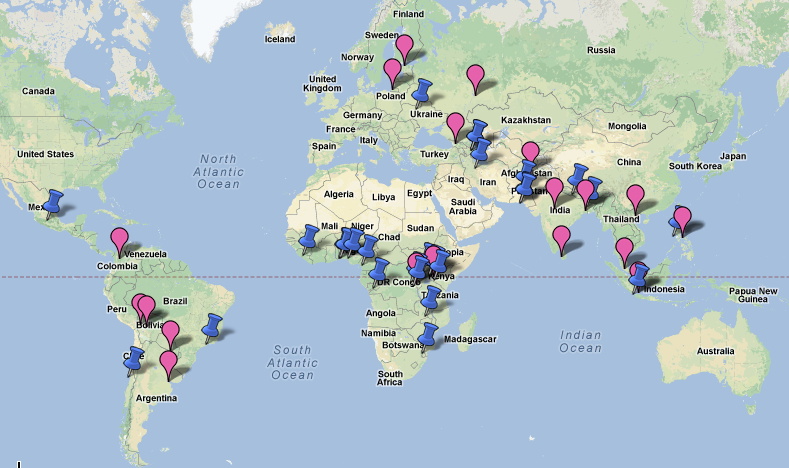 In total, IBJ has awarded 45 JusticeMakers Fellowships in 32 countries from throughout Asia, Africa, South America and, for the first time in the 2012 Competition, in Eastern Europe.

In 2012, in partnership with the Levi Strauss Foundation, IBJ awarded 12 $5,000 grants to innovative community activists with projects that improve the lives of people living with and vulnerable to HIV/AIDS within the criminal justice system. Fellows came from 10 countries on 4 continents and presented diverse and creative ideas to solve the problems that they saw in their communities.

During the the 2011 JusticeMakers Competition, IBJ awarded $5,000 in seed funding to ten applicants for their innovative legal reform projects pertaining to issues present within the applicant’s local criminal justice system.  Winners of the Competition are from Latin America, Africa and Asia.  As a special theme for this Competition, IBJ also awarded three Fellowships to projects focusing on the intersection of HIV/AIDS and the criminal justice system in partnership with the Levi Strauss Foundation.

IBJ’s inaugural competition in 2008 saw defenders, human rights officers, and public officials from 30 countries propose innovations seeking to curb torture and legal abuse. Project ideas tackled a range of existing problems in one’s legal system by seeking to alleviate these issues through a variety of innovative ideas – including a grassroots monitoring system of police abuse, seeking reparations for victims of abuse in detention centers and holding workshops to raise public awareness of individual rights. In the final selection process, eight fellowships were awarded to projects that exhibited the most relevancy, efficacy, practicability, and sustainability.

JusticeMakers also has a rolling application process for innovators whose proposals fall outside the timeframe or thematic focus of the competitions. If you have a proposal, please click here.