You are here:  Home » Advisement of Rights » Mabel provides training to both professionals and detainees

Mabel provides training to both professionals and detainees

Mabel Jenny Antezana Arispe is one of the winners of the 2011 JusticeMakers competition organized by International Bridges to Justice. She graduated in Law and Politics and post-graduated in Criminology, has been a member of the Permanent Assembly of Human Rights for over ten years, taught Roman Law at the Universidad Mayor de San Simon and has been a practicing lawyer in Bolivia since 1997.

According to a study by the Government of Bolivia about the situation in the Bolivian prisons, most inmates are incarcerated for robbery, assault, rape, injury to others, and for consuming illegal substances. The study also states that these inmates are better off in jail, where they are safe from persecutions and attacks outside. However, those individuals who are incarcerated for an extended period of time have the risk of losing their families and their connections to the outside world.  Lengthy detainments result in a double punishment, because the inmates not only lose their freedom, but they are also subject to terrible prison conditions. State policies do not do much for the prisoners and those who are imprisoned are rendered helpless. 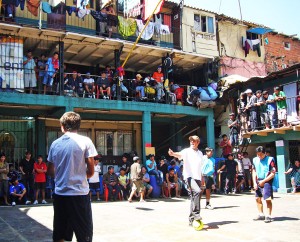 Mabel and Verónica Marisol –who is a 2011 JusticeMaker too, have had the chance to visit the Bolivian prisons together. Prisons are extremely overcrowded and pretrial detainees frequently spend months in prison without access to counsel. Generally, they are taken to jail with their family, which means that children live in prisons in terrible conditions, with their parents while the parents are serving their sentences [see the picture on the left].

In Bolivia, 22% of the inmates are in Cochabamba, which has six prisons. More than 1,200 youth live in the Bolivian prisons. The San Sebastian prison (Cochabamba), is where Mabel has been organizing training workshops. The situation in San Sebastian prison is so dire that the ceiling is falling down, they have one toilet for 650 inmates, and each prisoner has to buy his own cell (between 500 and 1,500 dollars) because the State does not provide them due to a lack of funds.

With her JusticeMakers project, Mabel “has learned to share”. She says that “it looks like a simple word but it involves so many things: looking through proceedings, sharing experiences, helping them in their cases and heading towards others, meeting their families, etc.”. Mabel’s goal is to train the professionals that represent the accused in order to ensure that detainees have access to justice effectively and to provide training to the accused. The goal is that detainees will know why they were arrested, the rights that protect them and their obligations once they are free. 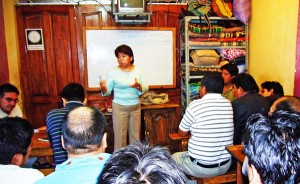 Mabel at one of her workshops

She says that “the project has been a success for the inmates in the penitentiary centre of San Sebastian”. At San Sebastian, Mabel has distributed a pamphlet with pictures of the penal procedures to educate inmates on the proccess. She also gave workshops on the penal process at the prison and the attendees were very willing to learn. She conducted judgment drills as well, to  to train inmates on how to behave at a court proceeding. According to Mabel, “The most important part of the Project is that the detainees are the ones that collaborate with the rest, since the information transmitted passes around the others, which made the project effective about knowledge of their rights.”.

After her experience working in the centre of San Sebastian, Mabel says that it is difficult to move forward in the course with the professionals because the prison officers would be replaced every 3 months so all the work that she carried out with them needs to be repeated over again on the new ones. She believes, though, that her project would have a bigger impact if she could organize conferences with the press and other institutions committed to the penitentiary system.