You are here:  Home » English » Justine Saidi successfully represents juveniles in the DRC

Justine Saidi is one of the winners of the 2011 JusticeMakers competition organized by International Bridges to Justice. She graduated with a Masters degree in Private Law and Judiciary from the University of Lubumbashi, located in the province of Katanga in the Democratic Republic of Congo (DRC). She currently works in the DRC as a lawyer, and is committed to defending human rights. Justine’s participation in the JusticeMakers’ contest represents an important stage in her career, which has been entirely dedicated to reforming the DRC’s judicial system. 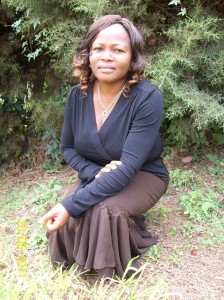 Justine’s project aims to improve conditions for young, pretrial indigents, who are the most vulnerable detainees in the province of Sud Kivu. In order to achieve this goal, she compensates for the lack of available legal representation for the majority of detainees, by providing her services free of charge to those who are most in need. Justine also collaborates with various other actors who are involved in the judiciary process – such as lawyers, magistrates, policemen and prison staff – in order to raise awareness about the problems affecting the efficiency of the Congolese judicial system.

In fact, in the Eastern part of the DRC, the rights enshrined in International Conventions and in the local Constitution are frequently violated in practice. Justine works towards securing respect for the presumption of innocence, as set out in the Universal Declaration of Human Rights and integrated into the Congolese Constitution, and respect for the fundamental rights conferred to everyone charged with a criminal offence. These are stipulated in Article 14 of the International Pact on Civil and Political Rights, as ratified by the DRC in 1976. As a lawyer, Justine’s work focuses mainly on of the rights of the defendant “to be present at his trial, and to defend himself in person or through legal assistance of his own choosing; to be informed, if he does not have legal assistance, of this right; and to have legal assistance assigned to him in any case where the interests of justice so require it, and for such legal assistance to be free of charge where the defendant has insufficient means to pay for it”.

In the DRC, many people are remanded in custody for very minor infractions, such as leaving a restaurant without payment, theft of food, etc. Their release is conditional on the informal payment of bail money to the Magistrates, in sums ranging between $50 to $1,000. 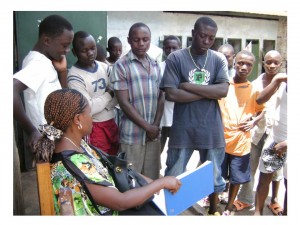 Justine explains juveniles in the DRC their legal rights

In a context of mass illiteracy, a huge number of prisoners are unaware not only of the charges made against them, but also of the rights that they benefit from under the law. Courts frequently lack material evidence due to the obstacles they face in collecting it in a judicial system that is still in its infancy, and in a country where travelling is still largely unsafe.

Justine Saidi has handled a number of cases in order to help improve the judicial system in the DRC. Thanks to her efforts, a number of prisoners have finally been tried after long years of waiting and some of them have even been acquitted.

This was the case for defendant M., who was prosecuted for the statutory rape of a 15 year old girl. Following the court’s investigation of the case, despite the fact that he was also a minor, M. was convicted and sentenced to 15 years imprisonment due to the fact that his parents could not prove his age with a valid official document. Justine Saidi lodged an appeal pursuant to Article 96 of the Congolese Penal Code, and thanks to her efficient intervention, the Court of Appeal reviewed the case and acquitted the defendant following the provision of a birth certificate by M.’s family. In fact, the Court inferred that, since the defendant was minor, he could not be prosecuted pursuant to Article 170 of the Congolese Penal Code.

Another rape case taken up by Justine was also successfully resolved; her help led up to the acquittal of K.L., who had been charged with the statutory rape of B., who, according to her parents, was only 14 at the relevant time. However, the defendant told a very different story: before the intercourse occurred, he had seen the electoral card of the girl, which certified that she was over 18. Thanks to the successful advocacy of our JusticeMaker, with no proof of age of the victim, the Court was unable to make up all the elements of the offense, and therefore discharged K.L.

Thanks to the contributions of devoted and active participants such as Justine Saidi, International Bridges to Justice gets closer and closer to its ultimate goal of ending injustice and torture throughout the world. We send out warmest thanks to Justine for all the work she has done in the DRC towards guaranteeing a fair justice system, which respects human rights.