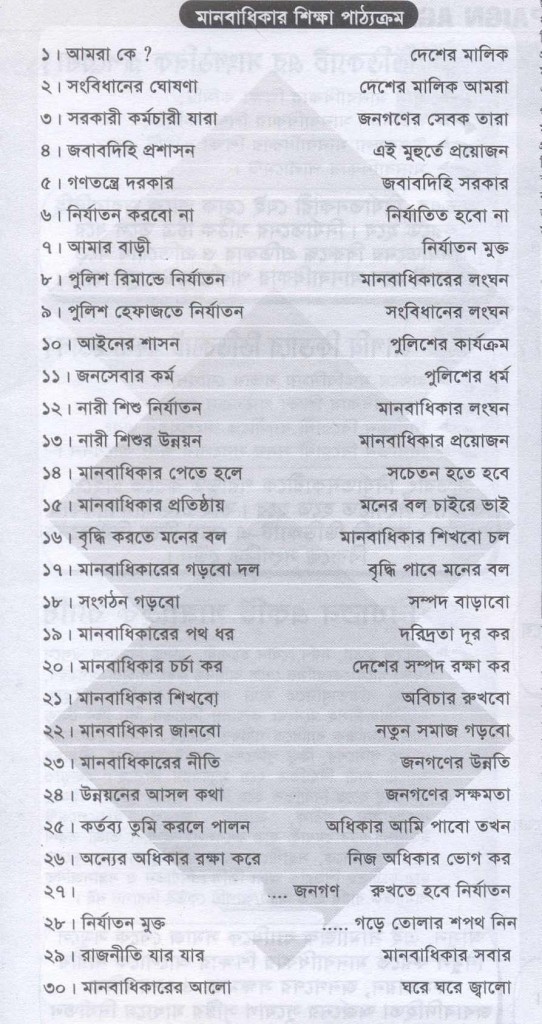 In preparation for a community information session that he will conduct in the near future, JM 2010 Shahanur Islam recently republished a brochure about human rights standards in Bangladesh. As the head of the Bangladesh Institute for Human Rights (BIHR), Shahanur first designed the brochure several months ago, in preparation for a door-to-door campaign to highlight the problem of torture in prisons. The pamphlet empowers ordinary Bangladeshis by informing them—in language easily understood by a layperson—of their rights once they are behind bars. As part of the community information session, Shahanur intends to distribute the brochure to residents of Dhaka who have fallen victim to police abuse.

Shahanur says that his intention in creating and publishing the pamphlet was to remove a “veil of silence” that keeps torture victims from asserting their rights as human beings and citizens of their own country. Understanding that citizen activism is often muffled by illiteracy and a lack of education, the brochure contains short, impactful phrases that ordinary citizens can learn ad share with their neighbours and friends, to help amplify their voices.

Written entirely in Bangla, the brochure includes information on constitutional, legal and religious prohibitions against torture. It also addresses the kinds of acts which constitute torture, and statistics about the frequency with which it occurs in Bangladesh.

How will the Information Session Proceed?

Where is torture prohibited?

Let us make people aware of the prohibitions on torture mentioned in the constitution, law and religion.

How do we suffer as a result of torture?

Torture is a Social Disease:

Incidences of torture in Bangladesh have increased alarmingly over the past years. Death, rape, sexual harassment, and blackmail are endemic problems. Though it is the duty of the police to protect citizens against violence, they themselves have allegedly killed many people and destroyed many lives in custody.

It is essential for awareness of torture and its consequences are more widespread in order for Bangladeshi society to become “torture free”.

Come on! To uproot these diseases from our society lets us empower the women and increase the capabilities of people and create opportunities for every one to make the administrators accountable to us, in order to build up a torture free society.

Let us speak out against torture before we become its victims. Let us generate a movement!

Who are we: Owners of the state

The Constitution declares that: We are the owners of the state

Public officers are: The servants of the people

Accountable administration: The requirement of the time

Neither will I torture: Nor I will be tortured

My home is: Torture free

Torture in police remand is: A violation of Human rights

Torture in police custody is: A violation of the constitution

Rule of laws: Determines the jurisdiction of police

To provide public service: Is the duty of the police

Torture of children and women is: A violation of human rights

For the development and children and women: Human rights are essential

To establish human rights: We should be conscious

To gear up our mental strength: Let us learn human rights

Build a group based on human rights: Mental strength will be enhance

Get organised: Get more wealth

Practice human rights: Preserve the resources of the state

To drive human rights: We should be conscious

Core of human rights is: Development of the people

Main theme of the development: Capability of the people

If you do your duty: I will get my rights

Preserve one’s rights, first: Enjoy your own rights then

The people of Bangladesh: Resist torture

Aim should be politics: Main theme is human rights

The lights of human rights: Lit in every house.