On April 6th, 2011 a meeting was held with students and professors of the Medellin-based University of Antioquia, where the project of  JusticeMakers Fellow Adriana has been developing. The aim of the project is to provide practical legal and political tools to counter the police abuses that are prevalent in the country due to unwarranted repression of campus protests. At these protests is where the campaign “NO MORE POLICE ABUSES” and “FREEDOM ONLY FREEDOM” was officially launched through the poster.

This poster was done in color to be more striking. Its content is organized in twelve cells where each principal abuse by the police that has been detected in the city is clearly explained. These are accompanied by graphics and text that raise awareness about the limits the police have regarding the rights of individuals.

One thousand copies were printed with a fresh and innovative design that ensures its future effectiveness. Adriana and her colleagues thought to distribute the poster for the entirety of the year in meetings that they will host as well as in bars, theaters and public spaces of the city. The objective is to have the poster in strategic places such as libraries, universities, schools, social organizations, youth groups, as well as where the several trainings will be held in the city.

The main goal with this poster is to distribute the information to the public that is susceptible to the unlawful deprivation of liberty and to encourage them to get control over these recurring acts that seem to have no social censure, only justifications. 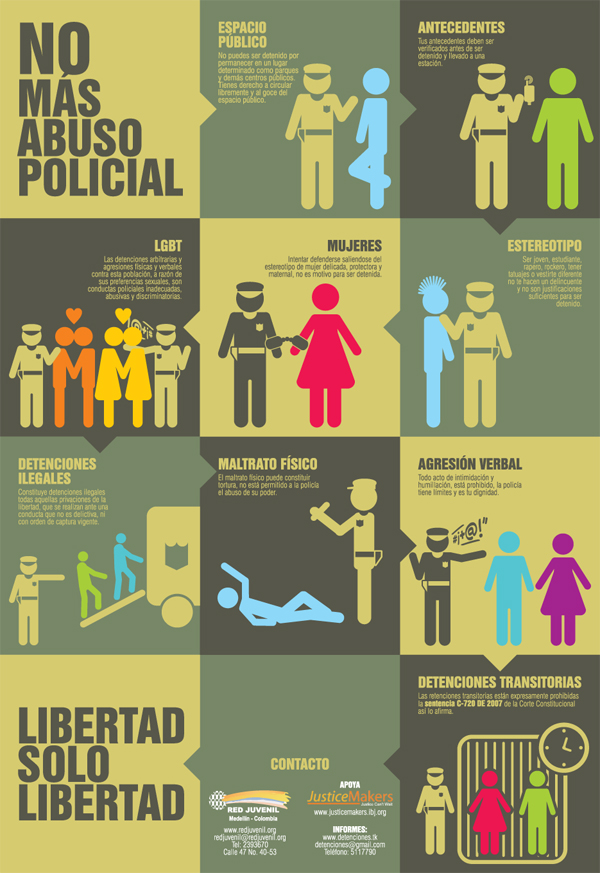