Since receiving the 2008 JusticeMakers fellowship, Joy Mdivo has taken on new projects that continue to promote human rights in East Africa. Joy is currently working with the EACLC (East Africa Centre for Law and Justice) whose main aim is to defend civil rights and freedoms. With the redrafting of the Kenyan Constitution in 2010, Joy’s work has revolved mostly around cultural and religious rights that were sensitive issues during the constitutional debates.  Joy says, “Even though right now we are mainly working to keep the State out of Church affairs, it is our hope that we will move to defend human rights of all kinds and across the Easter Africa region, which has been bedeviled with gross human rights injustice in Somalia, Ethiopia, Eritrea, Sudan, and closer to home, Uganda.” 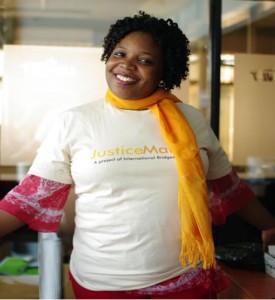 Nevertheless, Joy continues to volunteer her time at CLEAR. When reflecting back on the fellowship in 2008, Joy says, “My career was impacted because I learned a new way of doing things.” She explains the importance of documenting work and sharing it with others. “When others know about it, they can partner with you and support you. That is something I do even in my current job. I document using all means possible and put it out there for other to see.”

The grant allowed Joy and her team at CLEAR to broadcast programs on the radio on topics such as succession, rights of the accused at arrest, and juvenile rights. Conducted by Peter Onyango, a Kenyan lawyer, the radio programs were hugely popular. Eventually, the station wanted to charge CLEAR for the airtime use and, due to budgetary constraints, CLEAR opted to pull their programs off the air. However, they were soon allowed to donate their time again on the station because of the outcry from the listeners who waited for the show each week.

Speaking of the impact her project had on the local legal system, Joy mentions CLEAR’s prison program where her team taught human rights to prison warders and prisoners. “They received the teaching enthusiastically,” says Joy, “even having a graduation ceremony in the end.” CLEAR also initiated Legal Eagles clubs, where CLEAR team members taught secondary school children their rights, administered moot court competitions in schools, and offered career guidance to those who were interested in pursuing a career in law. Joy explains that their efforts were quickly recognized by the Chief Magistrate in Kisumu. “The Chief Magistrate had glowing praise, indicating that if he encountered unrepresented children, or a human rights case where the parties were too poor to engage counsel, he knew who to call. This was very good to hear.”