You are here:  Home » Embedded Documentary Journalism Program » One Family’s Struggle in Court Highlights the Need for an Overhaul of the Juvenile Justice System

The Kuala Lumpur Court for Children is located at the end of a long and narrow corridor in the Kuala Lumpur Courthouse, quite a daunting and complicated stretch to cover for most families making the trek to see their loved ones. On October 21, JusticeMakers Fellow Dato’ Yasmeen Shariff made a visit to the court for an impromptu meeting with the presiding magistrate, a meeting made possible only by Dato’ Yasmeen’s reputation as a renowned attorney and willingness to collaborate with government officials. She shuffled through the crowd of concerned family members milling in the entranceway, as they waited for the court to open its doors and for the hearings to begin.

As a member of the government-appointed Special Committee on Child-Friendly Places of Detention, Yasmeen is responsible for ensuring that courts and detention centers are equipped with child-friendly facilities. Recently, she had been made aware that there was no juvenile holding cells for this particular court, forcing children to be handcuffed and escorted by police from lockups in other holding facilities and police stations. Many lawyers and activists on the frontlines of juvenile justice reform argue that using handcuffs stigmatizes children as hardened criminals, and often hinders their willingness to honestly participate in court hearings. Through post-trial interviews conducted by welfare officers with child offenders, the Department of Social Welfare found this tactic to be extremely intimidating for children, and unnecessary if the court had proper holding cells for children.

When Dato’ Yasmeen voiced this concern to the young female magistrate, the judge responded that there were in fact courts with holding cells for children, but these were more centrally located in the court complex and thus awarded to civil courts, presumably of higher priority. Dato’ Yasmeen assured the magistrate she would address this matter in future meetings with the Kuala Lumpur Bar Council, as well as the Child Protection Council under the Social Welfare Department. Dato’ Yasmeen thanked the magistrate for her honesty and sincerity, and ensured anonymity of her statements.

Yet the real story of Dato’ Yasmeen’s morning occurred next, and unexpectedly. After exiting the court, she observed a court police officer bickering with an elderly man, whose profile indicated he was noticeably distressed and confused. Yasmeen approached the man, and pulled him aside to inquire about the argument.

The man, accompanied by his wife, daughter, son-in-law and newborn granddaughter, explained that his son was arrested in Kuala Lumpur two months ago for a motorbike theft, and had been held in remand awaiting his hearing. The family had already made the two and a half hour bus trip north from their home state of Malacca last month, an expensive and difficult journey for a low-income family of five. After seven hours of waiting, the father was denied entrance to see his son due to a miscommunication among court officials about the validity of his relationship to his son. 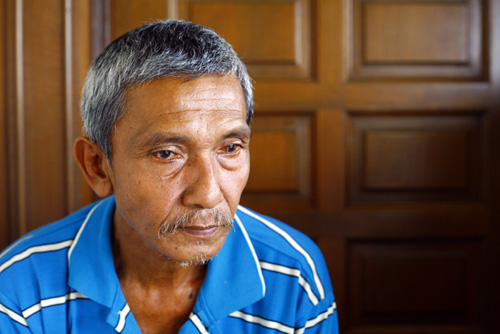 A father, who traveled two and a half hours by bus to from Malacca to Kuala Lumpur, is denied entrance to his son's hearing and threatened with arrest due to a mistake by court officials. With Dato' Yasmeen's assistance, he was able to explain his situation to the bailiff and avoided imprisonment. Nevertheless, countless families face similar dilemmas, unfortunately without the help from lawyers like Dato' Yasmeen. (Photo by Jeffrey Bright)

This mishap ushered in a vicious cycle of events for the family. Currently under the 2001 Child Act parents must be present for the court hearings of their children. If a parent fails to present a legitimate reason as to why he or she could not attend, they can be subpoenaed and risk a fine and/or imprisonment.

Because the father was precluded from entering his child’s first hearing, the courts did register him as present. Thus, the courts sent a welfare officer to the listed address to investigate the family situation. However, in a far to common blunder, the given address was incorrect, and the court issued an arrest warrant for the father.

The family made its second trip back to Kuala Lumpur on October 21, this time spending the previous night in court corridors to ensure that they would be on time for the hearing. When the family appeared again for their son’s second hearing, the father was not only barred from entering the court and seeing his son for the first time in two months, but greeted with the unfortunate news that he could possibly be arrested for failing to previously appear in court.

After hearing the story, Dato’ Yasmeen, who had known the court police officer for quite some time, relayed the father’s story, and had him inform the advisor to the magistrate, and consequently the magistrate herself. After ten minutes of anticipation, the officer reappeared and allowed the father to enter the court and embrace his son. He was then sent to another office to clear his arrest warrant, and a potentially dreadful and preventable calamity was averted. 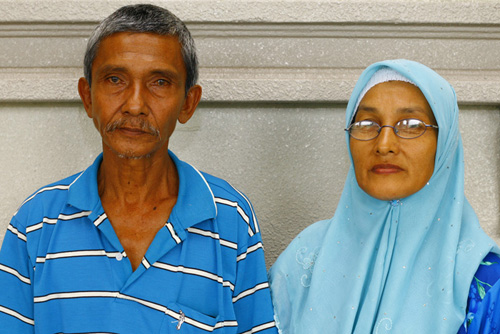 These parents struggled to merely see their son and participate in his court proceedings -- a clear example of why the juvenile justice system needs reform. Dato' Yasmeen Shariff proposes to institute a policy of diversion for petty offenses by steering juveniles and their families away from the traditional court system. She emphasizes restorative justice, and aims to utilize alternatives to custody such as mediation and community service that better serve the needs of the community. (Photo by Jeffrey Bright)

Sadly, not everyone has the good fortune to accidentally bump into a “Yasmeen” in the midst of such a predicament. And, as she regrettably admits, this a recurrent narrative in her line of work.

This type of convoluted interaction between families and the courts is what Dato’ Yasmeen’s JusticeMakers project aims to address. For minor offenses like motorbike theft, juvenile offenders and their families are currently forced to undergo the stress and complications of court proceedings. Families may be required to travel long distances, raise bail money, seek lawyers and participate in a judicial system that is confusing and never fully explained to them. Furthermore, procedural errors such as this case of an incorrect address are frequent and can be debilitating to a family already overwhelmed by the judicial process.

Dato’ Yasmeen proposes national reform to divert petty juvenile offenses away from the regular court system, and towards alternatives to institutionalization. Upon arrest, the police officer would analyze the offense and, when applicable, notify a welfare official. Subsequently, specialized welfare agents would conduct further analysis and recommend a tailor-made method of rehabilitation, ranging from family mediation to community service.

Dato’ Yasmeen recognizes that families play a vital role in a child’s upbringing, and can often be the source of why the child has come into conflict with the law. In an examination of juvenile cases, the Department of Social Welfare concluded that “family has been the major contributory factor leading to juvenile delinquency.” (2008 SUHAKAM Report)

However, engaging the family is much more effective when done in environments they will find comfortable and accessible, unlike courts which can be confusing and intimidating. 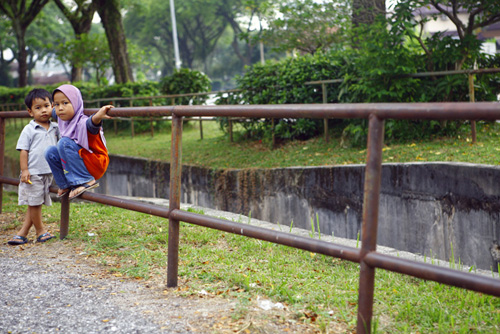 In cases of juvenile delinquency, children are often neglected by their family and suffer due to this lack of parental guidance. This reality makes it ever the more important to involve families in the rehabilitation of their child. (Photo by Jeffrey Bright)

In spite of a small victory that day in the Kuala Lumpur Court for Children, one cannot help but imagine the hundreds of families and children suffering without legal advice. Families continue to participate in a judicial system that has yet to fully grasp the concept of restorative justice for children, a philosophy already embraced by some of Malaysia’s regional neighbors such as Singapore and Hong Kong that have adopted policies of diversion.

Dato’ Yasmeen envisions a future where families and their children aren’t stigmatized by Malaysia’s judicial system. “Can you imagine how much more effective it would be if rather than that family traveling to Kuala Lumpur, a family mediator in Malacca visited them at their home, and set up interactive trainings that helped get to the source of the child’s delinquency? It would make the world of difference, and encourage family’s to be more accountable and proactive in their child’s development.” And as Dato’ Yasmeen converts more people to this progressive way of thinking, this idea is slowly becoming a reality.